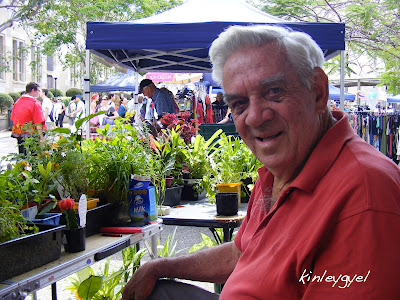 There is a hint of sadness in those grey eyes and the figure wrapped up in weather-beaten jacket and trousers. But if you were to ask Donald Michael, 77, would say, “life is good,” and his eyes wouldn’t betray him. He is a contended old man, who has seen the good and bad in life.

At the University of Queensland’s St Lucia market, Don (as he likes to be called) is usually seen sitting comfortably on a chair. His gray hair is combed back and his watchful eyes gaze from behind a table full of small potted plants that he sells. Time stands still in his cosy corner, but it always attracts some who want to stray away from the hullabaloo of university life.

Don is the oldest among the stall owners at the market. His relatives have often suggested that he go to an old home but he is determined to carry on. Despite the hard work involved in loading, unloading plants and setting up the stall Donald maintains that he enjoy his independence.

Selling plants is Don’s post-retirement job, one that supplements his superannuation. Life isn’t difficult but he still has to make ends meet. “The fortnight 380 dollars simply isn’t enough,” he says. “Besides, I come to the market to meet people, people like you.” He laughs out loud and quickly, with a no-nonsense tone in his voice says, “I observe people.”

Occasionally, Don nods or waves at students and staff as they walk by. He has been at the university’s market and other markets around Brisbane for the last 10 years selling plants. “That was when I retired from my job as a land surveyor,” he recalls.

It wasn’t for a love of plants that Don started the business, but he has developed a green finger over the years. Often people come with gardening or pest control queries. And he always has a suggestion.

Don has also developed friendship with some university students. “Since he is friendly it is easy to start a conversation with him,” says Ngo Thi Linh Chi, a postgraduate student of University of Queensland. “I admire the efforts he puts into his business but I get the feeling that it’s is not all about money. He enjoys interacting with people.”

To be among the crowd Don makes his way to the markets three times a week in his Holden Barina. “The other days I go to the nurseries at Capalaba to buy plants or shopping to stock the fridge,” he says.

Don always makes it a point to visit the markets every week, except on holidays such as Christmas. With his business taking much of his time, Don has little leisure time which he spends watching television or listening to the radio. At home, in the evening, watching television is his usual routine. He lives with his wife and grandson.

With a flicker of pain in his eyes Don says that his wife adopted his grandson after his father passed away at the age of 30.

However, Don does not let the pain extinguish the happiness he felt when each of his children were born. “The best memories are of the times when I saw my new-born babies,” he says. Don has seven children, all of whom were born nine months apart.

The time he met his wife at a social and days at the beach as a lifeguard are other memories that he often turns back to. “I was a good swimmer,” he remembers. “When I was around 16, my friends and I would go up to the Gold Coast and stay Fridays and Saturdays patrolling the beach.”

As a teenager, Don won the north coast championship and represented Queensland at the Australian Championship in Sydney and Adelaide. He was also the school captain at Brisbane State High School, a school which he remembers fondly.

“I received a call the other day from the school and they have invited all the past school captains to the school in November,” he says. “I will be presenting school leaving certificates to the students.”

Such simple things make Don happy. Occasionally, he bumps into old high school classmates, some of whom he had never talked to. Such chance meeting makes him happy, too. But, most of all, what would please him is a vacation either at the Gold Coast or the Sunshine Coast.

“I’d love to swim,” he exclaims. “I haven’t done that in the past two years.”
Having to earn a living, Don finds it difficult to find time for a vacation. He has even given up golf, another sport he likes to play.

Despite having had to give up a number of things after retirement, Don happily insists that life is good and he wouldn’t trade his home, job and his independence to go into an old home.
Posted by Kinley Wangmo at 6:20 PM No comments:

A weather-beaten wrinkled face that I knew like the back of my hand floated among the mass. Grayish-white hair and beard as long as that of a dwarf, it wasn’t just familiar. I knew it. The tshechu in all its splendid colours and music made it only more familiar.

It was a rendezvous with Déjà vu. The old man’s eyes kept following me through the crowd, weaving its way among the people. It never left me. I could see him watch me. It was like watching my life on television, although there was no disconnection between the physical me on the tube and the spiritual me watching what was happening. The emotions were one. And in an instant it dawned on me. “Meme!’ I cried out.

“I thought you’d never recognise me,” he said. His compassionate eyes were as wise as ever.

“I did,” I said but didn’t quite know how to explain that the one looking at the scene recognised him but not the one at the festival. “You should have come forward and talked to me.”

A distant sound of someone blowing a conch tore his gaze from me. I followed it and saw a monk on the steps of Zangtopelri blowing the creamish white shell. The serene blue sky gave way to dusk. The temple stood as if floating amid the green grass and the blue sky. “It is now time for me to leave,” said Meme, gazing at the temple with such serene face…it brings peace to my mind even now.

I don’t remember what I said. Maybe it was the calm elements of nature that brought peace to my heart and which stopped me from stopping him. I don’t recall Meme walking away from me. But I know he went to a place of peace and calm. A place where colours were soothing like the dull sun warming up your back on a lazy afternoon.

I woke up that morning feeling peace as I have never known before. I remember sharing this blissful dream with my parents when I was home from college for winter break. My father had said, “Meme must have got his place in Zangtopelri.”

“He really must be in heaven for I have stopped dreaming about him, which I usually do when it’s time to perform his annual funeral rites,” Ama added.

My grandfather passed away in the winter of 1995. I remember the look on ama’s face when I came home from my winter vacation. When she came out to help me with my luggage I excitedly started chatting but one look at her face and I knew something was wrong.

There were tents outside and, inside, our home was packed with relatives, friends and monks performing rites and rituals.

I don’t remember being sad. I don’t know why. Meme had passed away while I was traveling back home from almost a month’s stay at my maternal aunt’s home in Deothang.

Meme was bedridden for years after suffering from a stroke and getting partially paralysed. He had a rugged handsome face with long flowing white beard. He always wore a faded brown gho up to his ankle, like a gomchen.

I don’t regret not grieving his death, because I know he was a good man and that death was not the end. I remember him often- remember the tales of yeti encounters that he spoke of, of fireballs chasing him, and of his sword and his travels along the rugged terrains of eastern and western Bhutan.

My only regret is not being at his death bed. Ama said he remembered me before he passed away. I’ll always remember him too.
Posted by Kinley Wangmo at 3:17 PM 3 comments:

My three-year-old niece is a baby with baby bangs and squinty little eyes. Aunty, I lob you,” she sings and my heart melts. She is an attention seeker who wants to be pampered by a special loved one in our family… just like me. So we compete for attention at home and jealousy burns ‘cold cold heart’.

So I push her away, ignore her but with my heart squeezed like it’s going to burst and overflow with love. A hardcore metallic outside- that’s a façade I put up for this little baby. A little whimper from her lips, I remind myself not to be beguiled, and then she starts questioning…. “Aunty what are you doing?” “ I am ironing,” I reply.

“It makes clothes good,” I say not knowing how to explain creases to a baby.

“By means of electricity,”

“What is electricity … Where is it?”

Her innocence touches me… “How much more innocent can one be,” I think … But instantly I am reminded of the enmity.

In the presence of the loved one she is an archenemy. I stoop over them with my eyes gazing and burning through her body as she rolls on the living room sofa with the loved one… the thunderous silence brewing in my head paused by childish cackles as the loved one tickles her.

At other times, I sit beside the loved one holding hands. A glint of jealousy in her eyes and she comes racing trying to entangle our fingers and trying to slip in her small paw.

The loved one laughs. I boil and burn. She struggles even as I tighten the grip. Now her face is contorted … she is ignored and not the apple of someone’s eyes. A wail slips from her lips… the loved one quickly releases the hand and tries to calm her.

Faster than lightening her face breaks into a smile. But surprisingly she snuggles onto my lap and leans on me, gazing upwards into my eyes. Her little paws gently tugging my fingers for comfort.

My heart melts again.
Posted by Kinley Wangmo at 3:14 PM No comments: 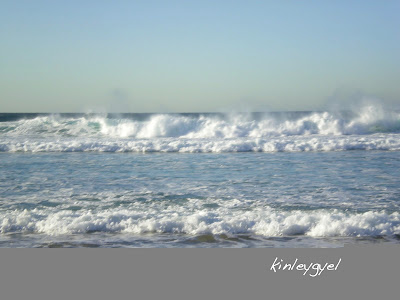 The sky crashed at my feet today
In frothy bubbles and foam
Gurgled up to my knees
And vanished as it touched the skin
In a frantic swirl
Of giddy
Excitement and emotion
The water rushed
in and out
The sand dissolved
The sky and the sea united
And in the blue and white
I soared...
Speeding towards the waves
Flying is not a mere word
Neither sailing just a song
Come fly with me
And sing of freedom and hope
Posted by Kinley Wangmo at 2:48 PM No comments:

I met a man yesterday
With eyes as old
as time.
Eyes
gray and dull
and nothing like
the pretty flowers
he sold.


Throat constricted
cry stifled
the eyes
were speaking
to me
I stood to leave
and
leave I did
for it wasn’t me.

This old man
made me think
I could love
Make him live
put a silver gleam
in his eyes
But leave I did
for it wasn’t me.

I could
Sit and talk
and spare few hours
of my life.
That’s all.
Posted by Kinley Wangmo at 2:44 PM No comments: