This story is based on true life events of animals living in and around the expressway, Chang Jalu and Chang Olakha, Thimphu, which is experiencing a construction boom


Snowy was not as white as snow. Not since the heavy construction machineries rolled on into the paddy fields, dug it and planted iron rods from which a concrete jungle grew.

He was once white, but now his hair was matted with earth, grime and cement. Just the other day he overheard his owner say, "Maybe we should shear him." But Snowy wasn't a sheep, he was a sixteen-year-old Lhasa Apso.

On his neck was a dark brown leather strap, but despite being a pet Snowy had the spirit of a wild dog. His guardians never kept him cooped in and he loved running amuck the green fields and the banks along the green blue river. But that was ages ago, or so it seems.

When his farmer guardians brought him home for the first time, he was merely a month old puppy. He could barely understand the human language. The farmer's educated daughter had held him on her lap the entire journey. The daughter was visiting her parents. She lived in Punakha.  When they pulled over at the edge of what looked like a cliff overlooking a settlement, the first thing Snowy noticed was the lush greenery. When the daughter called out 'ama' Snowy's attention was drawn to a tanned woman at the roadside. Her lips wide apart giving a peek to doma stained teeth. He took an instant liking to this hardy woman, who resembled the sleek woman who'd stroked his fur the entire journey.

The years rolled blissfully. He developed friendship with the cattle, the villagers and the wide expanse of fields. But, something happened. Suddenly there were no green fields. The earth, which remained uncultivated became hard. Giant machines were ploughing through and soon vehicles were zooming through what was once paddy fields.

Now, he lived in the middle of chaos. His world no longer made sense.

Just the other day, Snowy faced a near death experience. Like a person with unsettled mind, he'd been roaming around trying to make sense. He saw Dema, a cow he'd grown up with, across the road. He called her named and sprang forward only to be blasted by a blaring noise of a car honk. It was so loud it took him by surprise. And he blindly darted forward towards Dema, who looked on with fear in her eyes.

Soon there were screeches of tyres and a heavy clash of metal on metal.

When the first vehicle missed Snowy, the other trying to overtake the first had screeched to a halt when Snowy appeared suddenly. The car following the second one lost control and hit it.

The drivers were cursing the dog. The traffic on the expressway came to a halt. Shattered glasses were on the road.

"You're lucky you didn't get hit," retorted Dema. "What were you doing anyway?"

Still recovering from shock Snowy was at a loss for words.  Soon, sirens pierced the air.  A limp body was dragged out of a vehicle and loaded on to the ambulance.

"I was coming your way," said Snowy. "I don't understand what's happening. Why can't I do what I want to do and live like before?"

"It isn't the place anymore," said Dema. As she started to move, Snowy noticed pain in her face.  She limped and each step was agonizing for her.

He looked down and noticed that one of Dema's hooves was hanging by, what seems like a thread. Her injured hoof was plastered in blood.  How cruel can life be? She'd lost her calf only few weeks back to an exposed electric wire.

"I wasn't as fast or as lucky as you were," she said. "This is the price I paid for trying to cross the road."

Dema had seen a patch of greens across the road, a treat was was difficult to come by. Her once farmer guardians rarely cared for her. They'd given up farming for real estate business.  Even after being hit by a speeding motor, the want for grass was bigger than her hurting hoof. But when Dema finally managed to get on the other side, the patch was a huge green plastic sheet, the corners of which were planted firmly in the ground by moving machines. 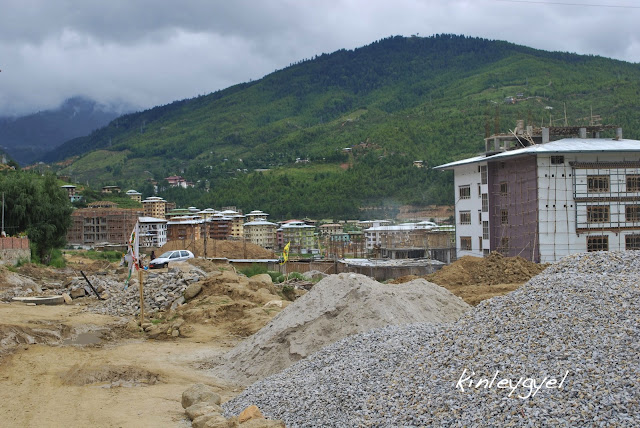 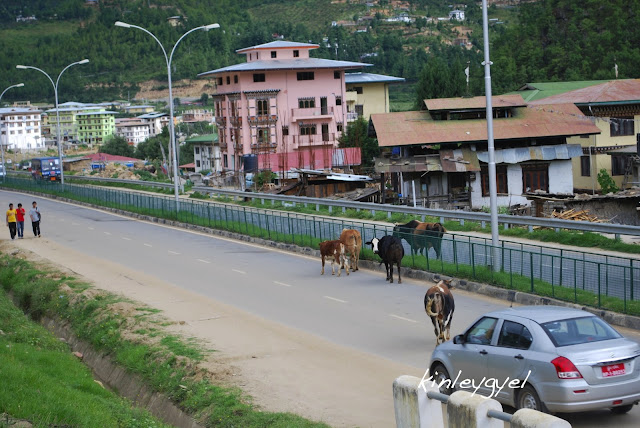 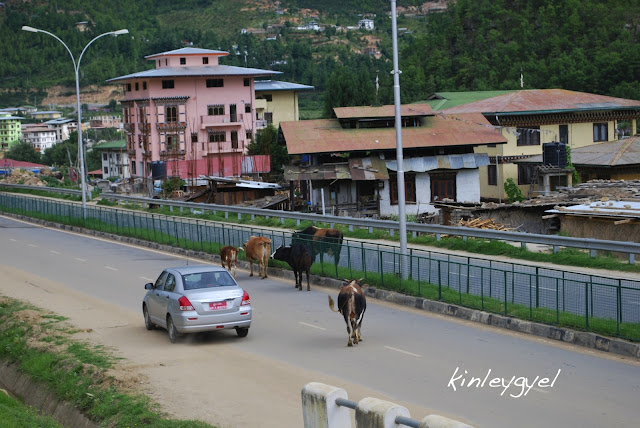 Posted by Kinley Wangmo at 12:21 PM No comments: